Posted at 10:27h in Physiotherapy by SportsFit

Returning to running post-pregnancy: Scared? I was

It’s been more than 5 years since I ran 5km. I was in my early thirties, working full-time, attending the gym regularly and didn’t have children. Since then, I’ve had two kids (my 4y/o son and 2y/o daughter) and we’ve opened SportsFit! During my first pregnancy I experienced pelvic girdle pain. This is common during pregnancy due to postural changes, increased pressure on the pelvis due to growth of the baby and hormonal laxity. The pelvic joints commonly experience increased strain and can become inflamed and painful. I managed my pain with Pilates, physiotherapy, remedial massage and home exercises.
In the two years after my son was born I attempted to rehab and return to running on my own. I eventually got back to running 3.5km but it was not pretty and my pelvis didn’t enjoy it too much. Very much a case of do as I say not as I do. You would think that as a physiotherapist I would be able to do it easily, but, as is the case with many mothers, my rehab and wellbeing did not come first and was very haphazard! I did manage to get myself strong enough to
manage my pelvic pain through my second pregnancy but was not nearly as fit as I would have liked. A year after the birth of my daughter I thought I’d start trying to run again. I downloaded the ‘Couch to 5k’ App and started with gusto, only to have other things get in the way again.
Seven weeks ago SportsFit decided to host an isolation fun run (5, 10, or 21km) on the weekend of July 18/19th. I decided this was my chance. I had a running program devised by our running guru physio Seb and have not looked back. Having a program to follow and being accountable to our Strava club members rather than just myself has helped me prioritise my 30 minutes of ‘self-care’ three times per week. I do mostly have the pram and a 4-year-old on
a bike but I’m absolutely loving it. Today I managed 4x 5min run/2 min walk, for a total of 4.6km (child-free) while enjoying the sunshine and fresh air! Fingers crossed I make it to the 19th of July but I am very confident that this time I’m on the right path. I’ll keep you updated… 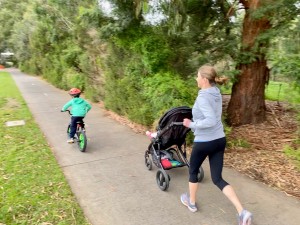 If, like me, you need some encouragement and assistance to return to running post-pregnancy then I highly recommend getting some support and a program set up by a health professional. It is also important to listen to your body and respect the fact that it is not the same as it was. After all, you grew a human, but that shows you can do anything!! 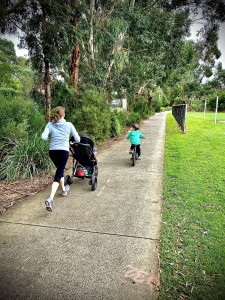 Jodie Porter
APA Titled Sports & Exercise and Musculoskeletal Physiotherapist
For more info and advice on how and when to return to running post-pregnancy READ HERE.