Posted at 08:56h in Clinic News by SportsFit

Congratulations to the SKOBFC Saints and Masters football teams who start their finals campaign in August. 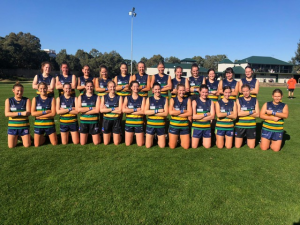 The SKOBFC Saints Golds and Blues will be competing in the VAFA William Buck Premier Women’s and Premier Reserve Women’s finals respectively.  It’s been another fantastic campaign by the Saints squad, who after forming only 4 years ago (in 2016), has seen their squad grow to 2 teams, nearly 60 players from all over Victoria and will be in their 4th straight finals (3 in the Premier competition)! 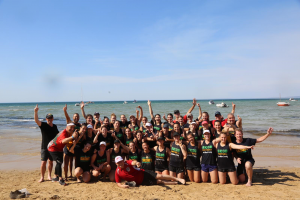 Prior to the season starting, Golds coach Tommy Purcell, along with a team of SKOB Saints players, lead a volunteer tour to Africa. This tour involved helping impoverished communities, in particular women and children, in Uganda and Kenya. Tommy’s compassion and drive makes him an extremely inspiring coach, as well as a great role model in our community. The Saints have continued to raise money for a Kenyan vocation centre by selling small textile goods hand made by the women there. 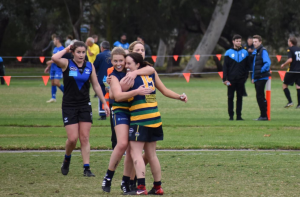 both represented SKOB in the VAFA Big V Women’s team who triumphed over AFL Goldfields by 151 points.  This was Ali’s second VAFA representative game for the season, having captained the VAFA International Rules team earlier in the year. Sarah has also played in the Big V side twice before, and has kicked an impressive 10 goals for the side across the 3 years. The Saints have also celebrated four 50-game milestones so far. Georgia Cropley was the first to reach 50 games, followed by Ali Hynes, Charlotte Stoltz and Rachel Gillet. These women have been such integral team players and leaders since the inaugural season in 2016.  A huge congratulations was in order for them as they made SKOB Saints history. 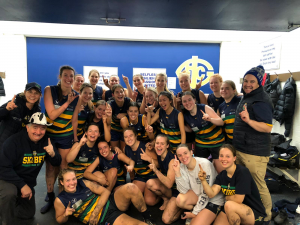 As well as the players a huge effort has come from coaching panels and support staff. The Golds coaching team consists of Tommy Purcell, assisted by Robyn Bowles and Ollie Stoltz. The Blues are coached by Chris Morley, David Jones and Karen Nitschke.

Both Saints teams will commence finals this weekend with:

We encourage you to go and support the, for further details on times and grounds check out the VAFA website HERE. 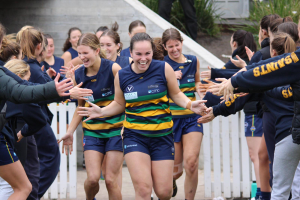